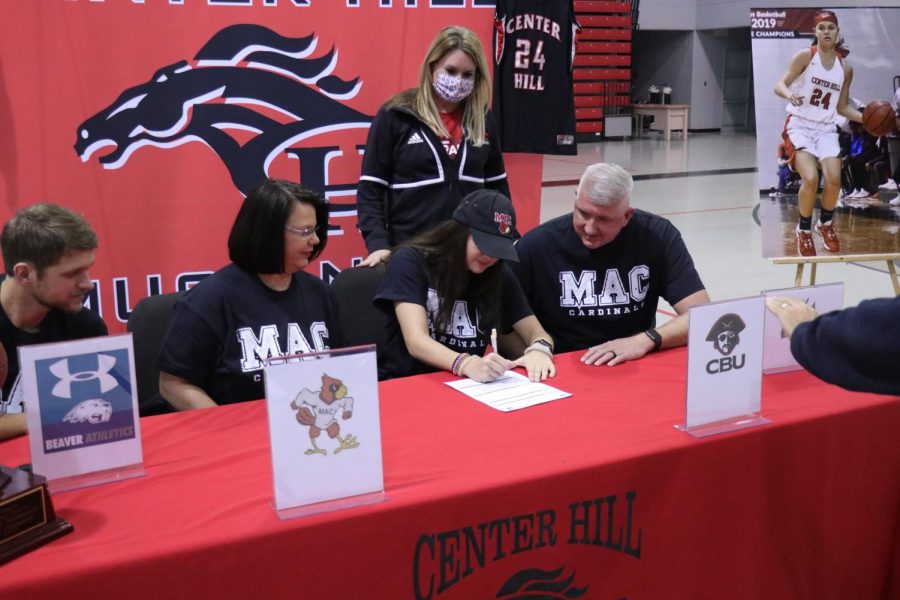 Hope Mealer, pictured with her family and Mineral Area College women's basketball coach Briley Palmer, signed a letter of intent Nov. 24 to play next year for MAC. Mealer, a shooting guard for the Lady Mustangs, said she chose MAC “because it has everything I want.”

Hope Mealer, a shooting guard for the Lady Mustangs who specializes in 3-pointers, will play for the Lady Cards at Mineral Area College in Missouri next year. Mealer, who had multiple offers, signed a letter of intent to play at the two-year school Nov. 24.

“I visited two, but five of them offered me,” Mealer said about her recruiting process, which included Pratt Community College in Kansas and Christian Brothers University in Memphis. She said she chose MAC “because it has everything I want.”

Lady Mustangs head coach Emily Owens said part of her job is preparing people for a fulfilled life after high school, and she’s glad to see Mealer make that happen.

“I feel like signing to play in college is the next step that she wants, and so it makes me happy to see her achieve that goal,” she said.

Owens also said that Mealer’s shooting and stats – including 85 3-pointers and an average of 12.2 points per game – speak for themselves.

“Hope is an excellent 3-point shooter,” Owens said. “That’s obvious to anyone that walks into the gym. She’s really worked hard to get better on defense and I feel like this season she’s really stepped up trying to find other ways to score so that it doesn’t just allow defense to take her out of her 3-point shot. She’s looking to drive a little bit more mid-range than she’s had in the past, which I think has helped her as a player as well as our team as a whole.”

“Spoken from a shooter myself, I like Hope’s range and how comfortable she is,” Palmer said. “You can tell that she’s put a lot of time in getting repetition. Basketball IQ is something we look for, and I’m excited to teach her our style of play with defense, but other than that I’m just excited to have a hard working kid that also has good character.”

Mealer is the daughter of Mustangs head boys basketball coach Newton Mealer, who introduced her to the game when she was a little girl.

“Today I’m a proud dad,” he said. “That means a lot to me, that she’s been able to accomplish her dreams and her goals.”

Mealer said MAC is a solid team with a great coach and great program for his daughter, who was selected to the first team for District 1-5A and is on the list of Top Seniors to Watch in Mississippi.

“I think she made the right choice for her from Center Hill,” he said.

Hope Mealer, who will continue to wear the No. 24 jersey at MAC, said she appreciates the support of her family, coaches and teammates.

“Thank y’all for pushing me,” she said.