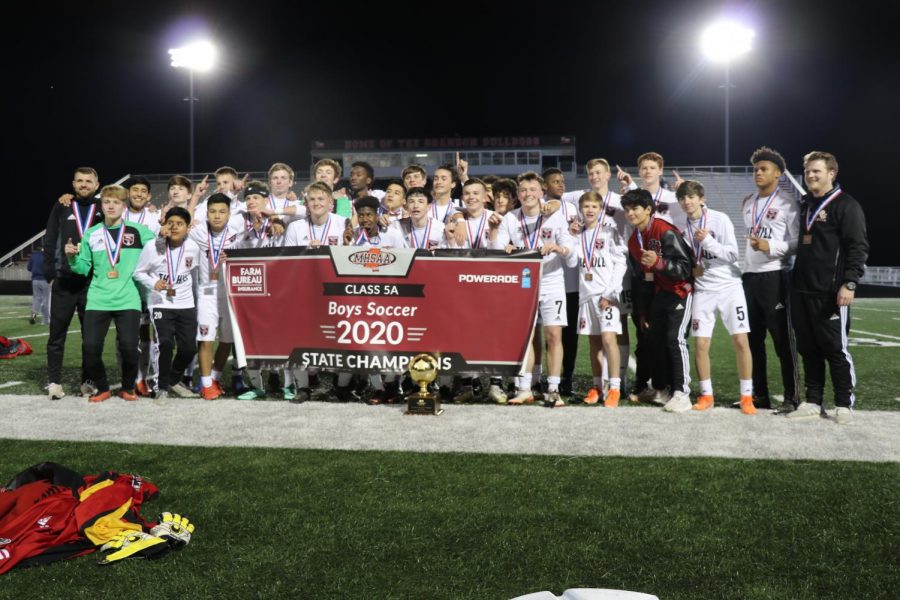 The soccer team celebrates with the gold ball trophy after winning the Class 5A state championship Feb. 8. Center Hill defeated Long Beach 2-1 in the match played at Brandon High School.

Defining a season described by one player as the most beautiful in his life, boys soccer won their first state title in school history Saturday.

“All happiness exploded after the last whistle,” said center midfielder Kuba Maszkiewicz, a sophomore exchange student from Poland who was the first to score for the Mustangs in their 2-1 victory over Long Beach. The Class 5A state championship match was played at Brandon High School.

After a scoreless first half, Long Beach made the first goal. Head coach Andrew Yeoman said he knew going in that the Bearcats were a great defensive team – they had only been scored on four times all year – and for the second half his Mustangs had to change their offense to overcome their opponent’s strong defense.

“The message at halftime was to take less touches and pass the ball more,” said Yeoman, who is assisted by Blake Lashlee. “When you dribble more than pass it allows the defense more time to set in and be compact. We also had the ball in dangerous spots in the first half but failed to get a shot off so we wanted to see them test the goalkeeper more.”

Long Beach was the first to score with a little more than 16 minutes to go in the second half. Maszkiewicz’s goal about a minute later tied the game 1-1.

“That was our team’s answer to their goal,” Maszkiewicz said. “Everyone was getting crazy but we had to keep playing. The game was not over so we had to focus on our task.”

With just over eight minutes left on the clock, Diego Valenzuela’s goal gave the Mustangs a 2-1 lead.

“After we scored the first goal, we all knew we could come back,” the left wing and center mid said. “I gave it all I got and put it all out on the field.”

Valenzuela is one of seven seniors on the team whom Yeoman called “an extremely special group full of selfless men who put the team first.”

The legacy of this championship team will last long after the seniors graduate in May.

As for Maszkiewicz, he’ll return home in a few months to WBS, the club team he plays for in Warsaw.

“They were supporting me all this time and they are waiting for another season with me,” he said. “But no matter what I win in Poland, my season with the Mustangs will always be the most beautiful in my life.”