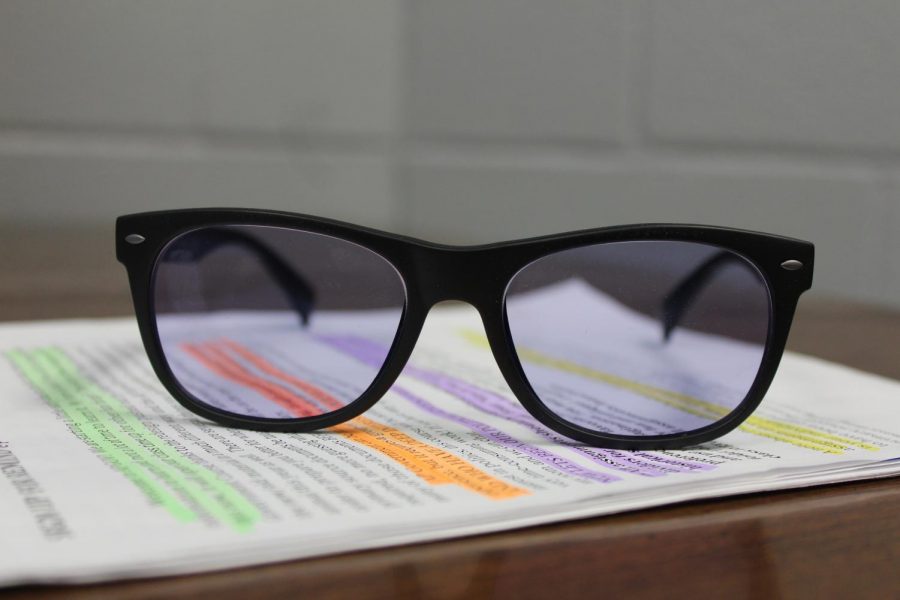 A $350 grant helped art teacher Whitney Lantrip buy this pair of glasses for two of her students who are color blind. “That one pair of glasses changed the lives of two students,” Lantrip said. “They are now able to wear the glasses to see true colors as they have never before been able to see.”

The world just got more vivid for Josh Polk and Ethan Ratcliff. The seniors, both of whom are color blind, can now see all colors clearly thanks to special glasses their art teacher bought.

“That one pair of glasses changed the lives of two students,” said Whitney Lantrip, who purchased the pricey eyewear with a $350 grant from Northcentral Electric Power Association. “They are now able to wear the glasses to see true colors as they have never before been able to see.”

Ratcliff said he was in kindergarten or first grade when he found out he was color blind, but the condition has never been difficult to deal with.

“I’ve always loved being color blind just because it’s something that makes me unique,” he said. “But normal things aside, from if something is solely color based, it doesn’t really affect me that much.”

“Essentially what it is, is a lot of colors look exactly the same, like I can’t tell the differences between them,” he said. “Red and green is a big one, but it also applies to blue and purple, and some shades of pink I cannot see. It’s more of I can’t distinguish between colors, not I can’t see.”

According to enchroma.com, where Lantrip bought the glasses, 300 million people worldwide have some form of color vision deficiency.

“Sometimes green looks brown, especially dark greens,” said Polk, who was 10 or 11 when he learned he was color blind. “I went to the eye doctor to get glasses for the first time and then they said that I probably had a small color blindness.”

He also said that living with color blindness isn’t all that bad.

“There’s just certain stuff you obviously can’t see but there’s not much difficulty,” he said. “With art, I’ve gone with a lot of black and white stuff because of it.”

Being a color blind artist is not as bad as it sounds.

“If I’m trying to make something realistic, it’s hard to get the right colors to use, but most of the stuff that I draw I don’t use traditional colors for,” Ratcliff said. “I like making things weird looking and all random colors.”

Critiques in art class are now easier with the glasses, which Ratcliff and Polk are sharing.

“I guess with art and stuff, I can see things better with different colors, color schemes,” Polk said, adding that he is grateful to Lantrip for ordering the glasses. “We can finally see certain stuff on different artworks that we couldn’t see before.”

For Ratcliff, “I like being able to not see colors the way everybody else does, but it’s cool to be able to have the option to use the corrective lenses,” he said. “This has always been something that I wanted to do, but I’ve never really had the money or time to earn the money to do this. I appreciate (Mrs. Lantrip) very much for it.”

Are you color blind?

To find out if you’re color blind, take the test at enchroma.com.