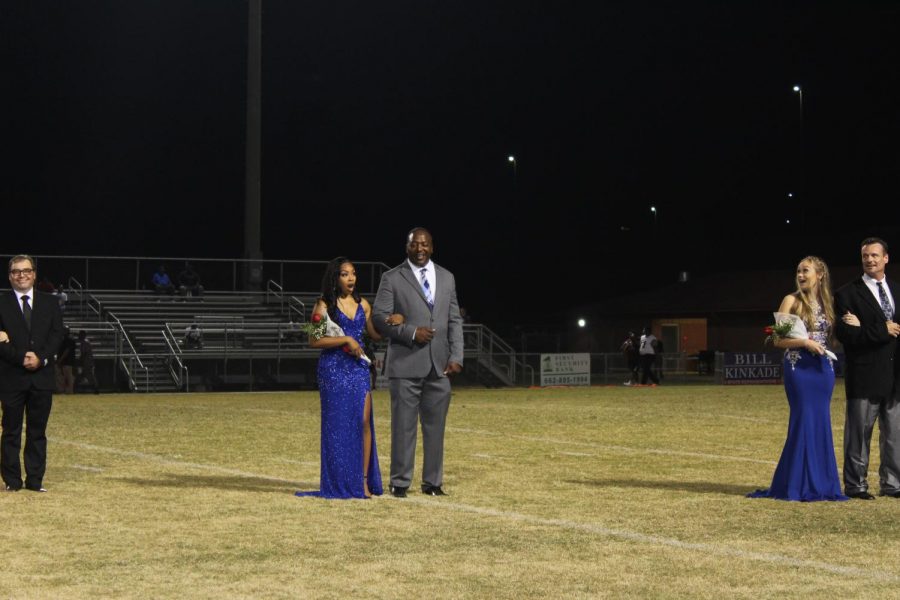 Kennedi Evans reacts to being named Homecoming Queen during halftime of the Sept. 13 game against Douglass High School. "I guess I had just prepared myself that I wasn't going to win and it really threw me off guard," she said. Junior maid Billie Boyd is pictured at right.

A first-time Homecoming maid walked away with the crown.

“It’s such a privilege and it could have been any one of the five senior maids, so I was just honored that the school chose me,” senior Kennedi Evans said.

Evans was crowned Homecoming QueenSept. 13 during halftime of the game against Douglass High School of Memphis. The Mustangs went on to defeat the Red Devils 34-6.

“I was extremely shocked,” Evans said. “It was my first year ever being on Homecoming Court, so I didn’t think I was going to win at all. When they announced queen it didn’t fully register with me that I won until they said my middle name. I guess I had just prepared myself that I wasn’t going to win and it really threw me off guard.”

No expectations meant no pressure for Evans, but that wasn’t the case for quarterback Preston Newson.

“It feels a lot of pressure knowing that people are looking up to you and have really high expectations of you,” said Newson, a junior who scored one of the game’s touchdowns. “It feels good to win though, and to know you have succeeded and helped everyone on the team.”

Zoie Peppers, one of three sophomore maids, said being on the court “made me feel like a princess.”

“It felt good to know that people wanted me to represent their class,” she said. “I was glad we won, because it made the night that much more special.”