The Pony Express • May 16, 2019 • https://chhsponyexpress.com/4208/sports/ken-lewis-signs-to-play-d1-basketball-at-jackson-state-university/ 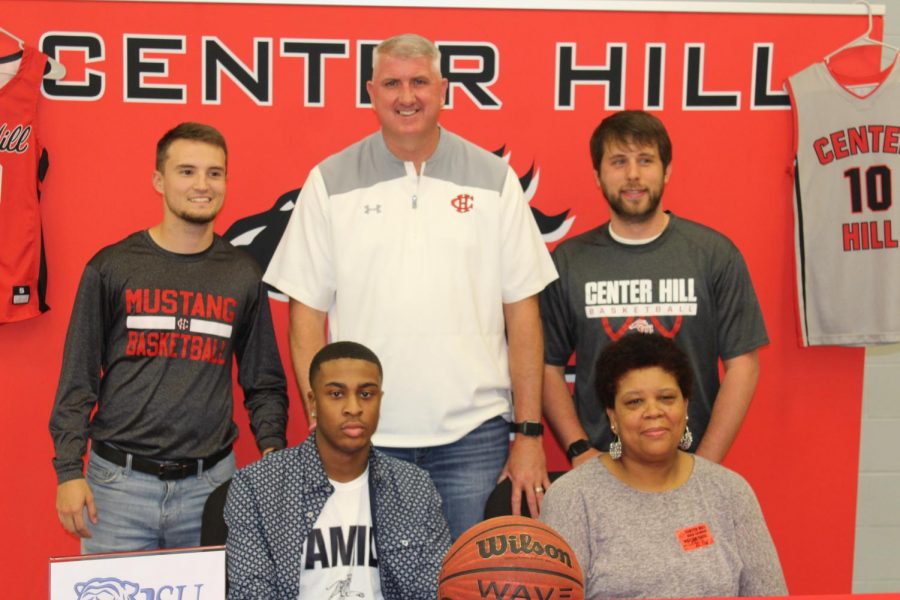 A Center Hill High School player who quietly but determinedly gives his all will be trading his Mustang jersey for that of the Jackson State University Tigers. Ken Lewis signed his scholarship to play basketball for the D1 school May 16.

“Keep working hard and never stop chasing your dreams,” Lewis said about JSU, which he has always thought of as a top pick for his future.

Patrice Lewis said her son, a 6-foot shooting guard, has played basketball since he was five.

“Over the years Ken has played AAU, rec ball and school ball,” she said. “Ken has always been quiet, reserved and well-behaved. Whether it is on or off of the court Ken is always giving 100 percent.”

She called her son’s move to Center Hill from Lake Cormorant a fairytale, and coach Newton Mealer didn’t deny it.

“Most of you know his story,” Mealer said. “We only had him for one year, but what a difference one year made. Ken didn’t get here until the start of school in August, so he had to win over not only the coaching staff but 15 guys that he had to try to beat out on the team.”

Mealer said Lewis was an excellent player when he arrived at The Hill, but being around higher caliber players only enhanced his skill.

He then listed Lewis’s stats.

“For us this year he averaged 13.6 points a game, 3 rebounds, 2 assists, 1.7 steals and he scored 448 points wearing a Center Hill jersey,” Mealer said. “He shot the ball 49 percent from the 3-point line. Ken went 75 for 152. There were games where he just wouldn’t miss shots. And that’s really what helped us. He also shot 80 percent from the free throw line.”

Mealer said signing a scholarship is the most special day for an athlete throughout the course of their career.

“As a high school coach, state championships are great,” he said. “Graduating is great, but so is being able to see players advance their career and continue to do something they love because they’ve done it right academically and athletically.”