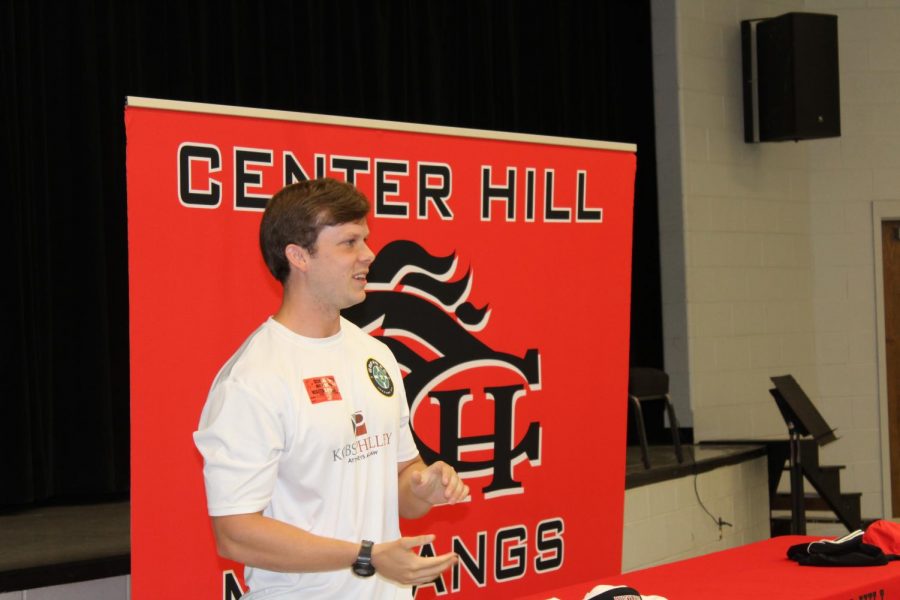 Ryan Worsham is the new girls soccer coach at CHHS.

A 2013 graduate of Pearl High School, Worsham helped the Pirates win two MHSAA state championships. He went on to play soccer at Hinds Community College and graduated from the University of Southern Mississippi, where he was vice president of the USM Club Soccer Team.

“He has a lot of experience on the field,” Principal Doug Payne said during this morning’s announcement in the PAC. “He’s excited and ready for tryouts.”

Tryouts for the 2019-2020 girls soccer team will be this afternoon. Originally scheduled for April 16, the tryouts were delayed when Dave Burgess resigned after 11 years as a soccer coach at Center Hill, including the middle school, in order to spend more time with family while his children are little. Burgess, whose daughters are 6 years old and 6 months old, is now coaching golf, a sport with a much shorter season.

“It’s tough whenever you get a new coach, so we expect you to step up,” Payne told Worsham.

Worsham said he would do his part.

“I want to help y’all’s dreams come true,” he said. “I came to Center Hill to win a state championship. I’m proud to be a part of y’all’s family.”

Bre Jimenez, a junior who plays defense for the Lady Mustangs, said she looks forward to working with Worsham.

“I’m excited,” Jimenez said. “We have a great chance of going to playoffs and winning.”

In the 2018-2019 season, the Lady Mustangs made it to the second round of playoffs but were knocked out by Lafayette County.