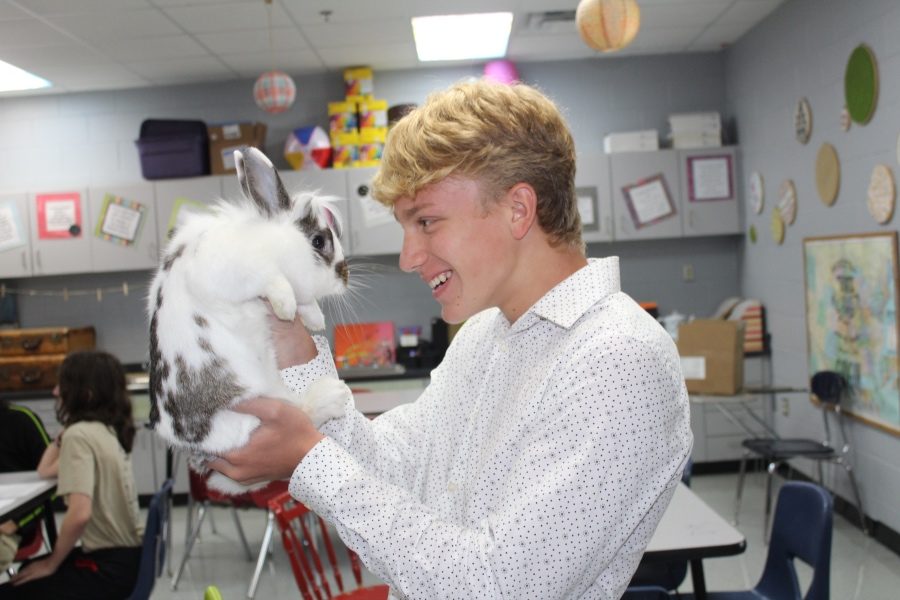 Center Hill High School has many teachers with animals in the classroom for educational purposes and fun.

“They teach kids compassion, responsibility and companionship, but for science they are also related to a lot of our lessons,” said Jennifer Denham, a biology teacher.

Denham sometimes brings a small corn snake named Richard to her classroom. Last year another of Denham’s snakes, Corny, escaped and wandered the school before being found. She said corn snakes are harmless and non-venomous.

“Snakes are different than most other classroom pets,” Denham said. “(Corny) could climb up walls or into corners and be invisible, but snakes require a specific heat and humidity. I had two students last semester that decided to leave a small opening in his cage and he was able to get out and starve before I got to him.”

“I bring him in a couple times a week for his safety and protection,” she said.
Snakes make good classroom pets, Denham said, because they need very little maintenance.

“Clean water, clean habitat, correct temperature, humidity, proper diet and feed at the proper time,” she said. “If you don’t keep the habitat clean or wash your hands after touching them, you can make the animals sick or you could get sick.”

Denham acknowledged that her students can be scared of snakes.

“For the most part yes,” she said. “They tend to be a little afraid of the snake at first so they poke it and I have to correct them on that.”

Ashlee Young, one of the Spanish teachers at CHHS, has a white bunny named Blanca in her classroom.

“I remember having (pets) in elementary school,” Young said. “We had a goldfish and the teachers liked to get our reactions. There is a correlation between animals and mental health.”

Young said she, not her students, is responsible for taking care of Blanca. This involves making sure the bunny has plenty of food and water and that her cage is cleaned.

“It’s lit,” 10th-grader Chris Burks said about Blanca, adding that holding her “is a great way to take a break.”

Another of Young’s students, 11th-grader Omaria Crutchfield, said having a pet in the classroom is a conversation starter. Caden Tackett, a freshman in Kerry Matthews’ biology class, said classroom pets are comforting.

“It makes me feel at home, because I have a pet at home and I have one at school,” Tackett said.

In her classroom, Matthews has a bunny named Oreo, two cockatiels named Chainsaw and Pickles, and a betta, or Siamese fighting fish, named Mr. Coffee. The fish is appropriately named because he lives in an old coffee pot.

Other animals at CHHS live on the school farm, which is operated by nutrition and wellness and resource management teacher Angel Pilcher. She said there are many reasons to have animals, including pigs and chickens, at school.

“It teaches respect and appreciation for life,” she said. “It brings students together, introduces possible career options previously unexplored, is a positive outlet for mental wellness, and encourages school attendance. I believe all families should have a family pet, and we are a Center Hill family!”